Hills: Knott Rigg, Ard Crags
Classification: Wainwrights (110 and 111)
When: Friday 22 March
Who: Me and the mountaineering minion
Distance: About 5 miles
Time: 3 hours
Weather: Blowing a gale. But stayed dry until I was off the hill (phew!)
Post walk drink: Well the actual first one was a pint of coke (what?!). The first proper one was a glass of Malbec.
Post walk watering hole: The Golden Lion, Keswick (if the coke counts, the Bridge Hotel, Buttermere)
Uses of the arse crampon: One (semi-intentional)
Mishaps: Weather (if that counts) and work (Stuart’s).

This year, my Wainwright bagging has been rather slow to get off the ground. I didn’t have any particular targets for this year, and still don’t, having got the ton up and the halfway point last year (the first of which was a target but the second was an unexpected bonus). I’d also had to cancel a planned trip at the beginning of March due to a dreadful weather forecast, annoyingly finding out later on that the actual weather on one of the days was a lot better than forecast (inevitably). It was still the right decision though as I had one of those cough/ cold bugs that seem to take ages to go away and the last thing I fancy when feeling ill is getting soaked or blown over.

Needless to say, the weather forecast for the first day of my Keswick break wasn’t great – the main issue being wind. The other mishap was that Stuart ended up having to work rather than coming with me on the Thursday night and the plan of him potentially coming later on was kiboshed by a points failure outside of Euston. Had Stuart been there I probably would have at least considered postponing any walking until Saturday (when the forecast was good) but with a day to myself and the others not turning up till the evening (we were meeting friends from the Scottish Hills website) I thought I might as well get off my backside and go and do something. For once there were no real issues with transport but I had a rubbish night’s sleep so what with that and impending weather doom any sort of epic was not an option.

The choice of hills was actually pretty straightforward. Given the forecast wind I needed to stay low and Knott Rigg and Ard Crags were about the lowest hills anywhere near Keswick that I hadn’t already done. They also had the advantage of a high start and although a ridge is not the best place to be footering about in high winds the ridge at least looked to be reasonably broad. The catch, such as it was, was that I didn’t have the car with me and given the Buttermere bus doesn’t start until April with Easter being so late this year, public transport was not an option. So the only way of doing the hills was to book a taxi – not the first time I have used a taxi to get to the start of a walk and unlikely to be the last! The taxi picked me up at 9.30 and by 10 I was gearing up at the summit of a very windy Newlands Pass having booked a return pickup from Buttermere in the early afternoon.

The initial part of the walk is a bit of a slog, steep in parts, up a grassy path; the views are good right from the start but the wind was pretty fierce even just up from the road and there were times when I had to stop while the worst of the gusts passed, though at no point did I feel in any danger of being blown over. The path winds its way around various rocky outcrops as it heads up to the ridge, and once on the ridge the views were excellent; the ridge is fairly narrow in parts but never too bad and it is quite wide at other times. However it was not a day to hang about and the photo breaks were therefore limited in favour of getting up the hill as quickly as possible! By 10.45 I was already on the summit of Knott Rigg for the inevitable summit selfie and had it completely to myself, nobody else seemingly being mad enough to be up there. Even though the weather was not great the views were still excellent. 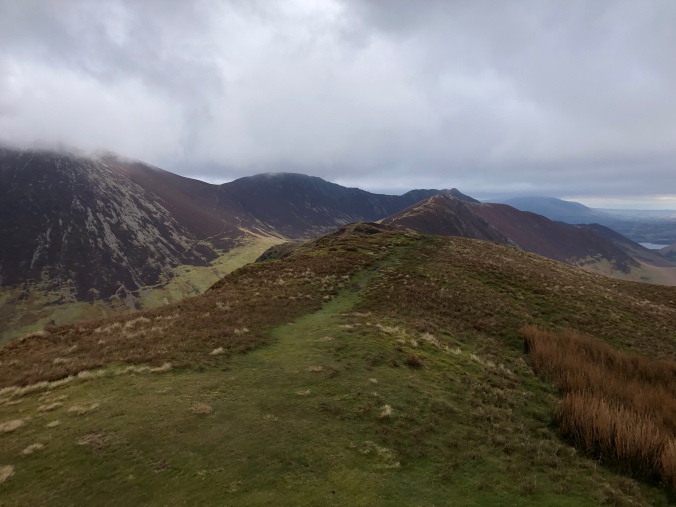 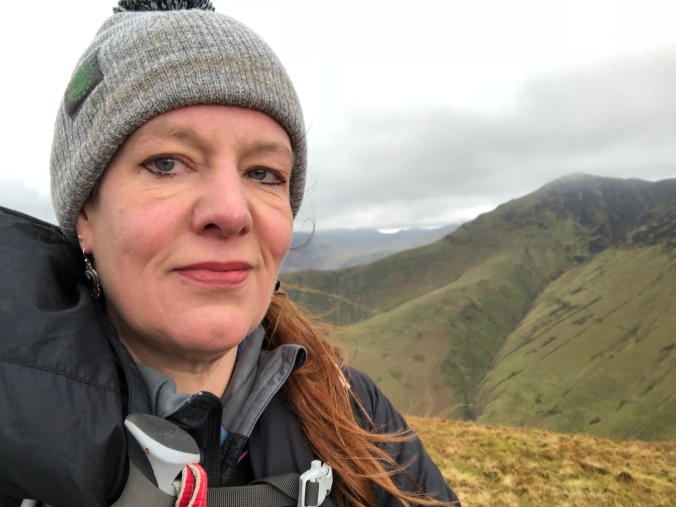 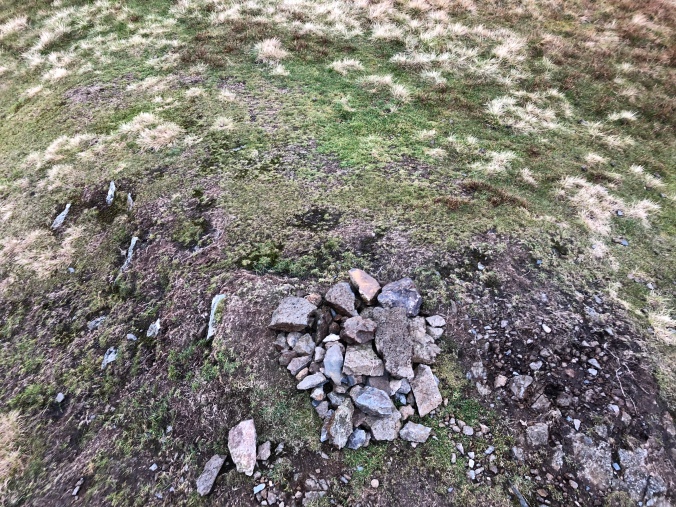 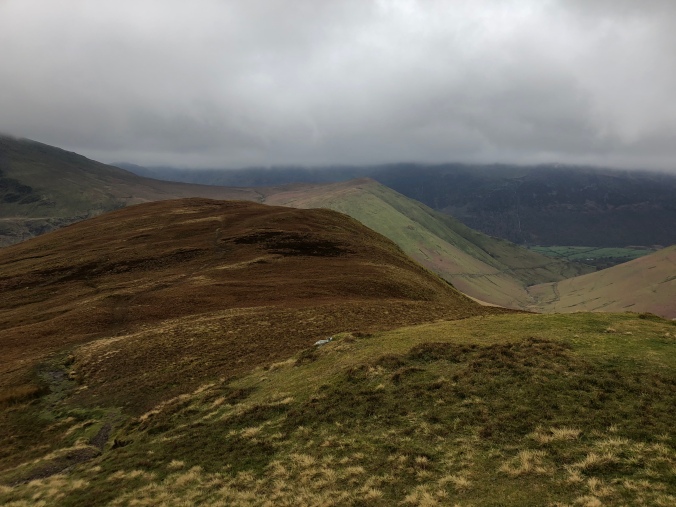 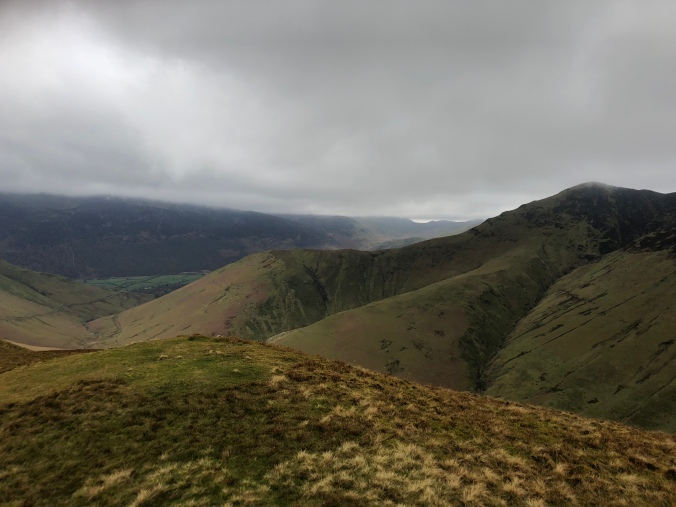 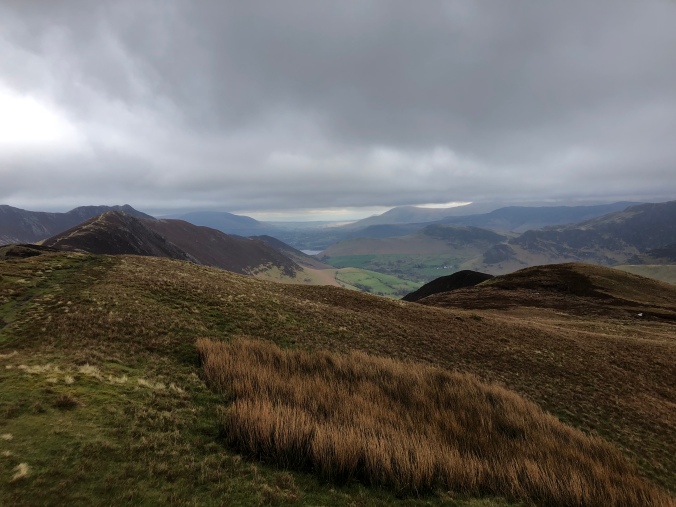 It was far too windy and cold to hang about though, so I set off along the ridge towards Ard Crags. The ridge stayed ok and the wind stayed just about the right side of walkable – though in some places it was quite fierce and in some places totally dropped (on more than one occasion the same place a few seconds later!) The summit of Ard Crags again had a great view but was windier than Knott Rigg, being that tiny bit higher, and the summit selfie was so awful as a result of wind blast that I have not posted it (given some of the dreadful ones I have posted that probably demonstrates how bad it was!) 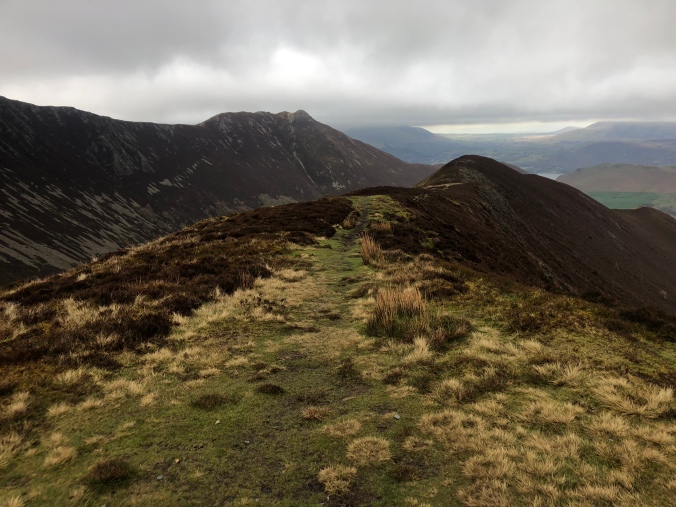 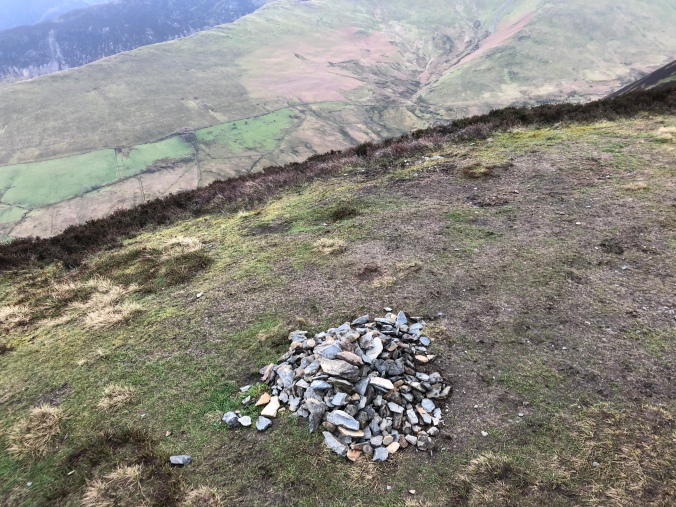 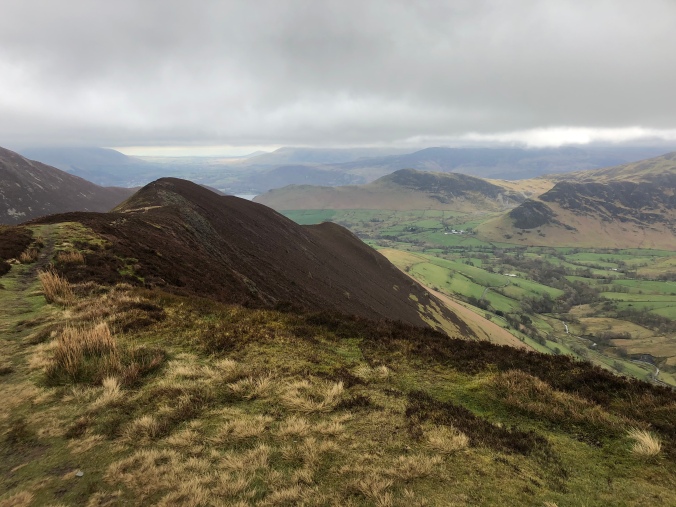 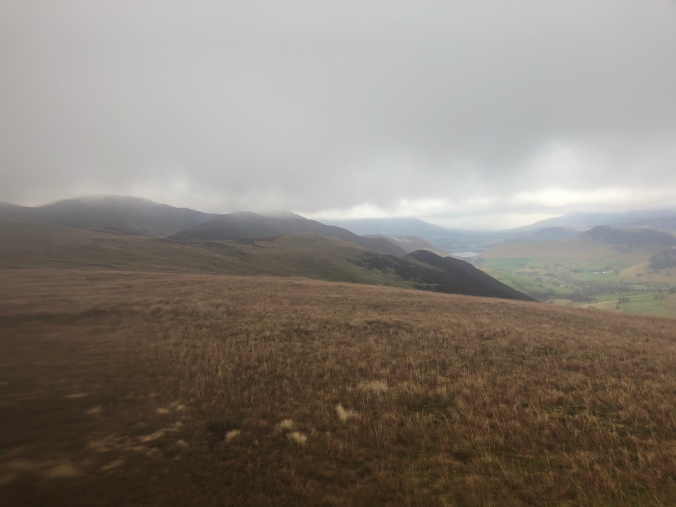 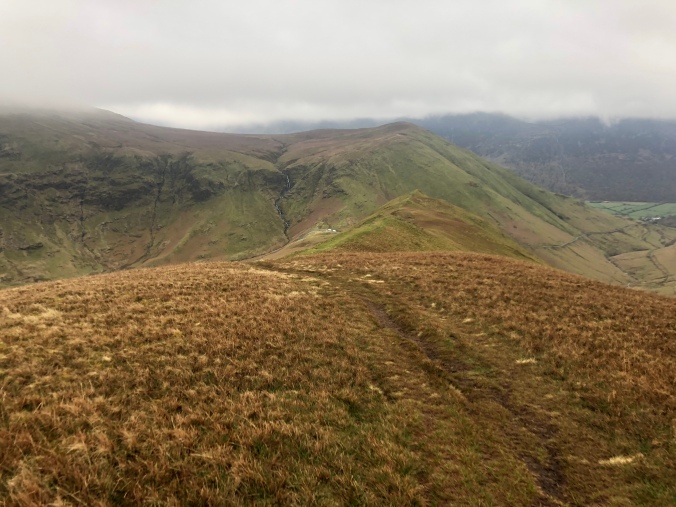 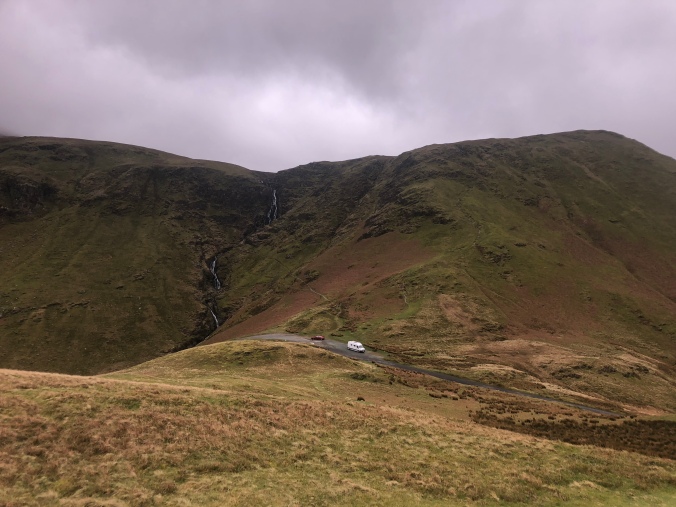 After taking some pictures I headed back along the ridge as fast as I could – by the time I got to Knott Rigg again the wind was definitely starting to pick up though the rain was still holding off. I had made better time than I expected to so moved my taxi pickup half an hour earlier. By the time I was on the final descent to Newlands Hause the wind was definitely worse and I was glad I had gone up there relatively early (for me anyway) not least as I got caught by a gust on the final steep bit and although I did not get blown over decided to deploy the arse crampon (which has been noticeably little used recently) for the sake of stability. Once back at Newlands Hause I simply walked down to Buttermere, visiting the little church before waiting in the Bridge Hotel bar for my taxi pick up with a pint of coke. Yes really – the inevitable Malbec was going to have to wait till later in the Golden Lion! My timing had for once been perfect as about 5 minutes after I got to the pub it started to chuck it down. I met the others in the Lion later on and a fun evening ensued with much discussion about plans for the following day which was due to be much nicer. 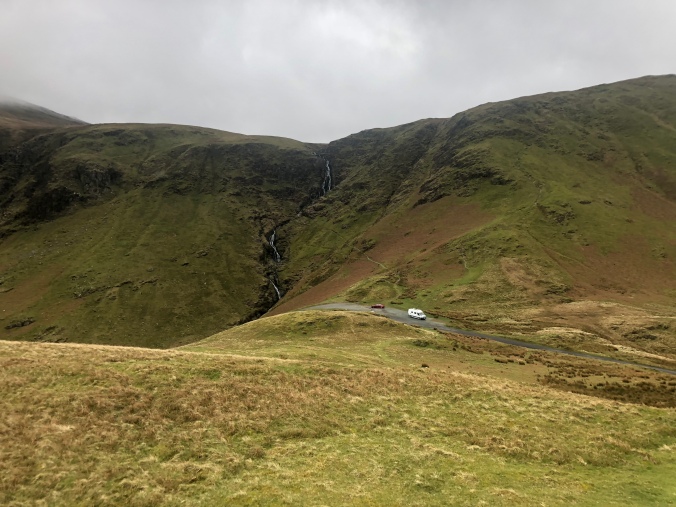 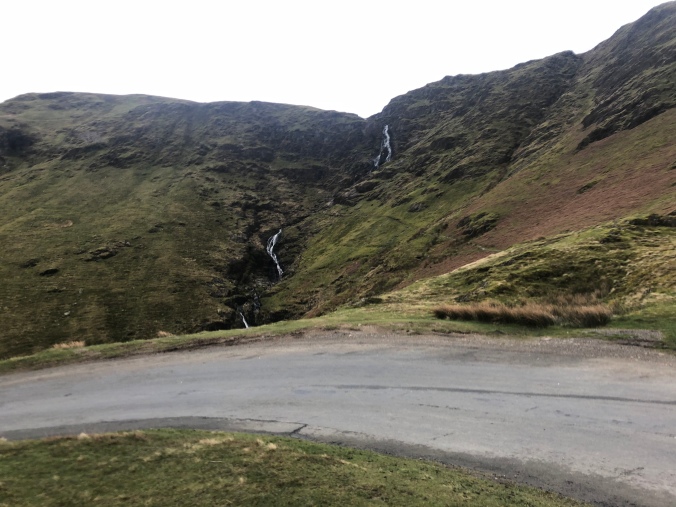 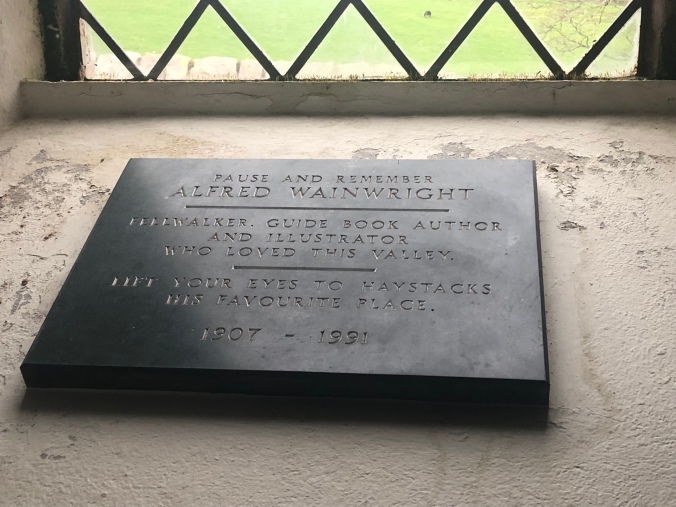 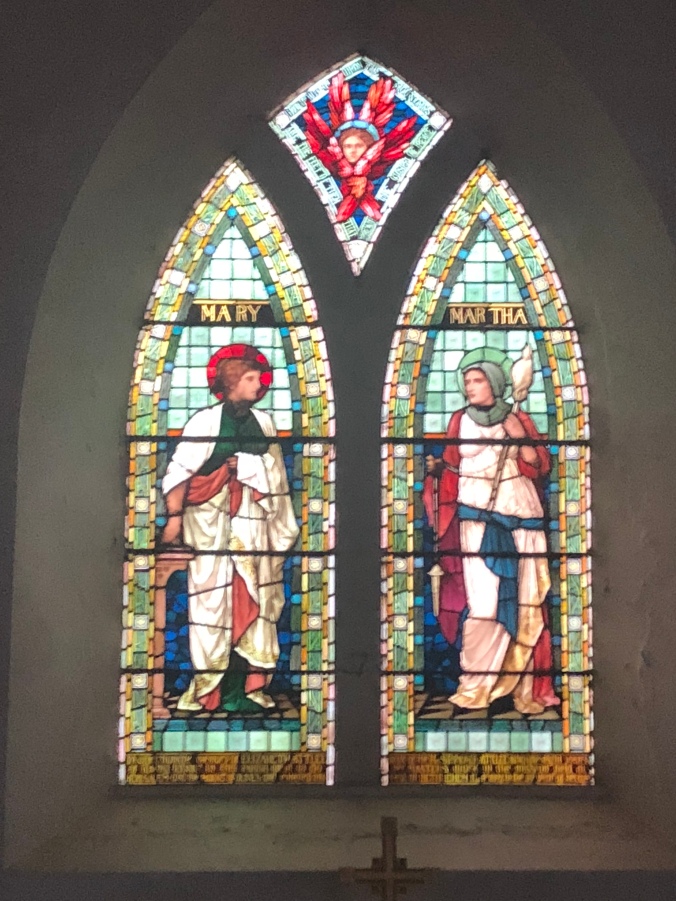 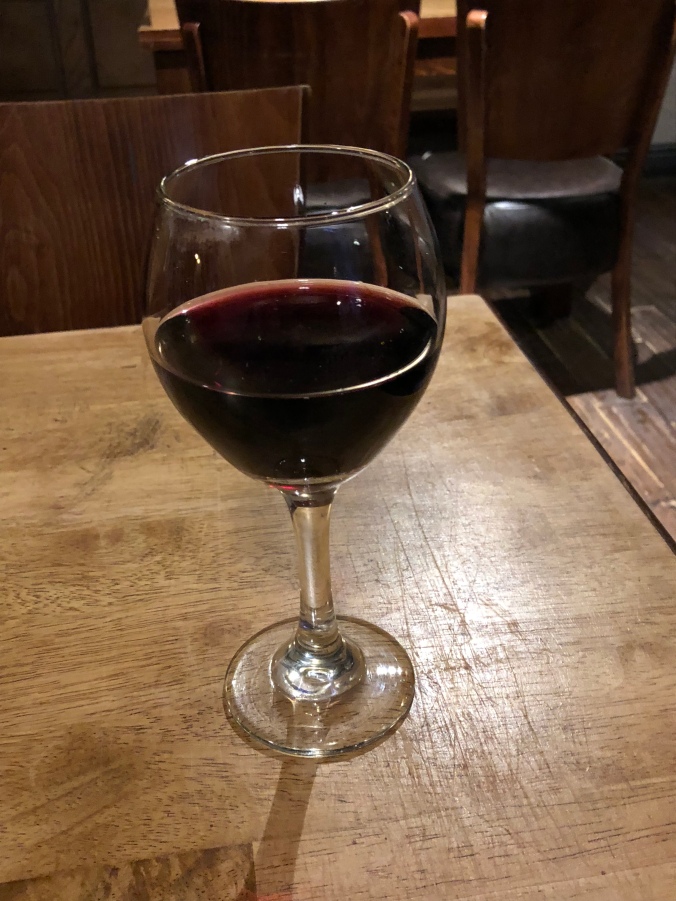 All in all this would probably be a lovely little walk on a good day but the wind made it more challenging than it normally would have been. They were nice hills though and ones I’d do again. And at least I still got a view and stayed dry!